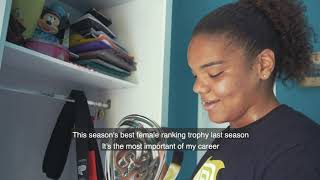 Gabrieli Pessanha is one of the most successful competitors in the AJP Tour, with multiple titles both in the Abu Dhabi Grand Slam Tour and the Abu Dhabi World Professional Jiu-Jitsu Championship. During the recent Abu Dhabi Grand Slam Tour Rio, on November 1-3, the Jiu-Jitsu World Plus News Team followed the champion in her birthplace of Rio to tell her story of dedication and hard work to become an international star. With “Following the Heroes: Gabrieli Pessanha, from CDD

The 2019/2020 season of the AJP Tour is gearing up to the final stretch with the first major stop scheduled January 16-18, in Abu Dhabi, UAE. The fifth leg of the Abu Dhabi Grand Slam Tour takes over the Mubadala Arena with competitors of all ages testing their skills as they compete for the ultimate glory. In the black belt division, the stars of the show are already lining up to compete and add valuable points in the annual AJP world ranking. Returning champions, new challe

13th ADWPJJC: global champions crowned after a thrilling day of matches in the Masters division

13th ADWPJJC: See who's on the run for glory in the adult black belt division

ADGS Rio: Black Belts in the Masters Division mix talent and experience in a thrilling day 2

ADGS Rio: purple belts and brown belts put on a show on opening day in Brazil

ADGS Rio: see who's on the run for the black belt gold medals in Brazil